The best way to understand how to work with the Black Tulip Multi-Door/Drawer/Curtain Tool is to go through an actual setup process, in a step-by-step fashion. To that end, we've provided a simple example build called "[Black Tulip] Test Door Model". To follow this Guide, you need to be in a location in SL where you have permission to Build (i.e. rez prims), and where scripts are enabled.

Rez the "[Black Tulip] Test Door Model" sample object included in your package. You will see two very simple miniature doors on a small platform: a single door and a set of double doors.

By following this Guide, you will see how to independently control the single door and the double doors. Proceeding in a similar fashion, you should be able to set up doors that consist of three, seven or sixteen prims. As many as you need (but please check the "Limits" section.)

When you work with your object, you have to make sure of the following:


The last requirement is very important: NONE of the prims that should work as doors/drawers/etc. can be the root prim.


Continuing with inspecting the object, make sure now that you're under the "General" tab.

Prims that will be considered as doors must have a distinctive NAME. Doors that are supposed to open and close together will have the same NAME. Let's insist on this: NAME. Not description. NAME. It is easy to confuse both fields. "Name" is above "Description". We will be using the upper field: "Name".

With your "Edit" window up, on the "General" tab, tick the "Edit linked parts" option if it isn't already ticked.

Now click the single door of the "[Black Tulip] Test Door Model" sample object. You will see that its name is "Kitchen Door".

Now click the prims that compose the double door. Both are named "Main Door". This is because we want the two prims moving together.

Our doors may be composed of one or more prims. When several prims are part of the door, we'll name all of them the same, so that the script can recognize them as a group to move them in a single block when opened/closed.

Now, MAKE A COPY of your build PRIOR to starting with the configuration process. Don't skip this. If you make a mistake while configuring the doors and feel lost, it's going to be easier starting again from this copy than trying to figure out how to solve it. You can of course try to figure out how to solve it after you've read the complete documentation, but in any case, make this copy. Now :-)

With this first information, we now compose a notecard that should be named "[Black Tulip] Configure Doors v2 ~CFG~"

Open the "[Black Tulip] Configure Doors v2 ~CFG~" notecard included in your package. (Double-click it in inventory and it will open.)

This notecard should contain the following text:

In this case, we have two:


Be careful writing these names, as the script will look for them in a case sensitive way. This means that "Main Door", "Main door" and "main door" are *different* names.

IMPORTANT: Do not use leading or trailing spaces for your name. The script will omit any leading/trailing spaces in the name, which will cause it to ignore any relevant prim using them.

IMPORTANT: Do not use names that are too long. The configuration tool needs to rename the prims once you're done. If your names hit the maximum length allowed, the controller will not work correctly. Keep names under 60 characters.

Once we have our "[Black Tulip] Configure Doors v2 ~CFG~" notecard ready, we have to:


The script will notify you when the configuration notecard is read with a message that reads for example as:


Once you read this message, it's time for the configuration tool script to work.


STEP II: EDIT THE BUILD TO SET THE DOORS IN CLOSED STATE

First, we have to tell the script that our doors are ready in closed state.
Edit the sample object and tick "Edit Linked Parts". Then rotate/move the doors so they are approximately as the following picture shows: 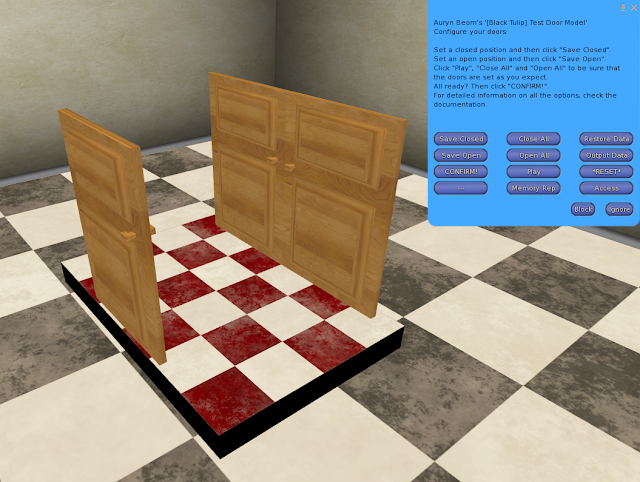 
STEP III: EDIT THE BUILD TO SET THE DOORS IN OPEN STATE

Next we will tell the script when our doors are ready in open state.

To do this, edit the build, tick "Edit Linked Parts", and rotate/move the doors so they're approximate to what the following picture shows: 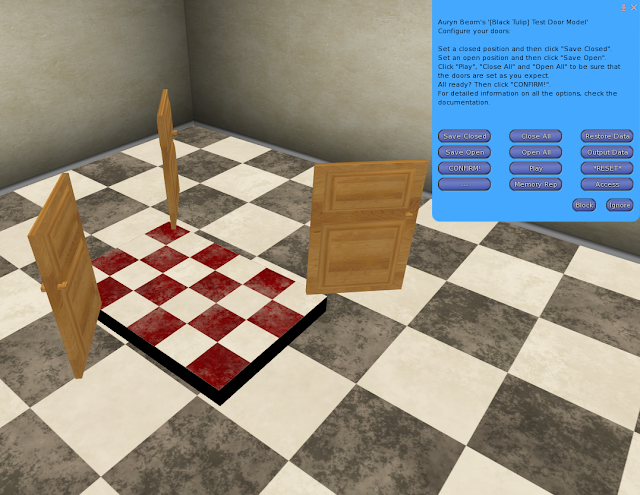 
NOTE: It's not required that we set first the "Closed" state, then the "Open". We may do it in the order we prefer. We may also correct the states whenever we want, simply clicking in the menu if the state we're saving is "Save Closed" or "Save Open".

NOTE: You don't need to close the menu and then open again every time you need it. You may move all the prims as you need while the menu is open. The timeout is set to 10 minutes. This means that once you open the menu, you may have it up for 10 minutes before it expires. During that time with the menu up, you can manipulate the prims normally, then directly select the option you need.

We have three options in the menu to test our doors. These are:

NOTE: If there are unsaved states, the script will remind us and won't set the doors... because it has no data saved to set them.

When everything is set as you desire, click to show the menu again, and select "CONFIRM!"

And what should we do with all the text obtained in chat? We use it to compose the "[Black Tulip] Door Controller v2 ~CFG~" notecard.

IMPORTANT: After we confirm, the door prims are RENAMED in a certain way. You will not be able to use your build as-is with your existing "[Black Tulip] Configure Doors v2 ~CFG~" notecard... but you will be able to RESTORE the information saved in the "[Black Tulip] Door Controller v2 ~CFG~" final notecard. However, since we all make mistakes, remember to MAKE A COPY of your build PRIOR to starting with the configuration process.

The configuration tool has some more convenient options that will help you while you prepare your doors, or if you need to restore the information from an already made build, in order to modify the setup. Check the "THE CONFIGURATION TOOL, IN DETAIL" section for all the details.

NOTE: A line beginning with # is taken as a comment line. Thus, everything written after it will be *ignored*.

You should see the following text: 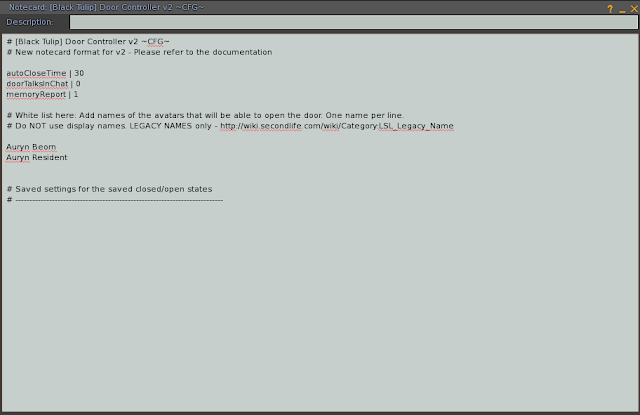 Right now, let's focus only on these comment lines:


Below them is where you have to copy the output in chat.
Where and what exactly?

After you clicked "CONFIRM!" in the configuration tool, you have obtained in your local/nearby chat window a lot of text that looks like the following: 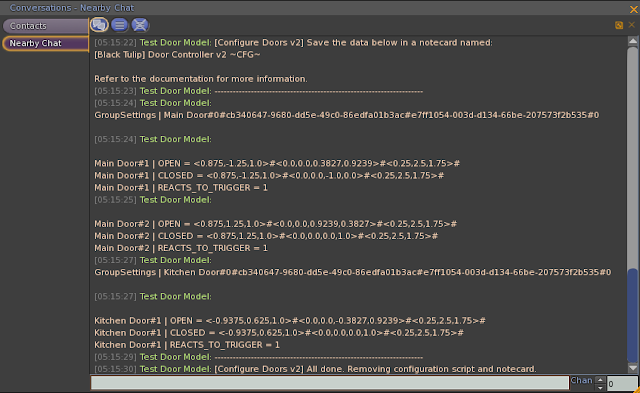 The text between this part of the output:


and this part of the output:


should be copied and pasted into the "[Black Tulip] Door Controller v2 ~CFG~" notecard, below the section: 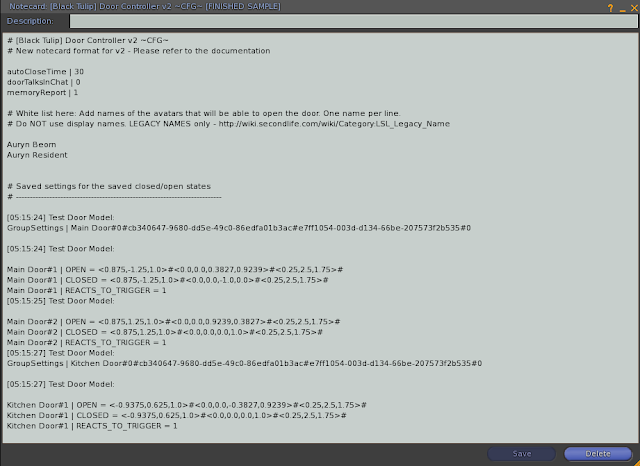 NOTE: Don't worry about cleaning out the timestamps in the notecard.

NOTE: If you want to clean the output and remove the timestamps, you can of course do so. That will make the script to read your notecard faster. Check the included "[Black Tulip] Door Controller v2 ~CFG~ [FINISHED CLEAN SAMPLE]" notecard for an example of how a "cleaned" notecard would look: 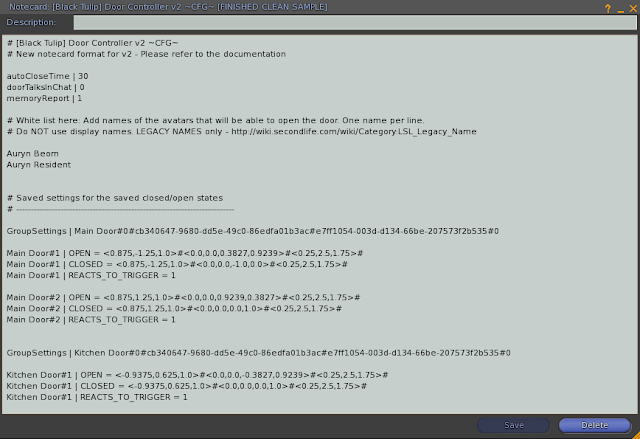 After having composed your "[Black Tulip] Door Controller v2 ~CFG~" notecard, save it, and drop it into the "Content" tab of the build. We're just one step from finishing.

And best of all? You're controlling *all* of your doors with a single script. The script, internally, optimizes the use of the timer so it's only working while there are doors open, but automatically closed as soon as all the doors are closed. And doors are usually closed. So don't worry about issues with lag.

MULTI-DOOR SCRIPT:
WHERE TO PURCHASE IT